A spat collection experiment was conducted to determine mussel spat settlement, spat growth and the problems of spat collection at ,depth of 2 m and 6 m in Loch Etive (LE) and Loch Kishorn (LK) on the west coast of Scotland. The results showed that neither depth nor site had a significant effect on temperature, seston, particulate organic matter and chlorophyll-a, while salinity was found to be significantly higher in LE than LK (P<0.001). There was a single peak in spat settlement in LE and two peaks in LK. Spat settlement took place in June-July in LE and in June-December in LK. There was a uniform spat settlement and growth in LE, although there were fouling organisms (sea squirt and starfish) which affected spat collection and growth of seed mussels in LK. The results also demonstrated that if polypropylene ropes had been suspended one or two months before than predicted spat settlement time they might be used as efficient spat collector.

Effect of LAS on plasma parameters of Oncorhynchus mykiss

In this work the influence of LAS was investigated on plasma parameters of Oncorhynchus mykiss. The values of GPT, ALP, VLDL, triglyceride, cholesterol, total bilirubin creatinine, albumin, total protein, uric acid and urea increased but GOT and glucose largely decreased in 7 days after addition of LAS.

30 adult rainbow trout (O. mykiss) (202.1 ± 3.5 g SEM) in a fresh water recirculation system were fed the first test diet containing small radio-opaque glass beads ‘ballotini’ (0.6-0.9 mm) until all fish were satiated. The fish were re-fed at different time intervals (t= 0, 4,8, 12,24,30 and 36 hours) with the second test diet containing large size of glass beads (1.16-1.40 mm) and X-rayed. The amount of feed consumed by fish for each time interval was calculated following the quantification of the number of different size of glass beads in the developed X-ray sheets and the appetite return of trout was modelled. A first order equation best explained the appetite revival data (Feed Intake=106.26*(1-e-0.079*time)). The times for 50 and 95 % of return of appetite in rainbow trout were observed as 8 and 28 hours, respectively. It was suggested that incorporation of markers of different sizes into various types of feed allows the amounts of each type of feed presented either simultaneously or as discrete meals offered within a 12 -hour-period.

Raindrop effects on the Mixed-Layer in the Sea

This paper reports on an investigation how far raindrops with free fall terminal velocity can penetrate the mixed layer of the sea water. This issue is studied by preparing an experiment set for the different radii that raindrops have. How far the raindrops can move in the mixed layer is found to depend on their kinetic energy. The data obtained from the results of the experiment are compared with the data obtained from the proposed relation. Knowledge of the penetration depth of the raindrops is important to determine the changes in ocean heat and salt content. 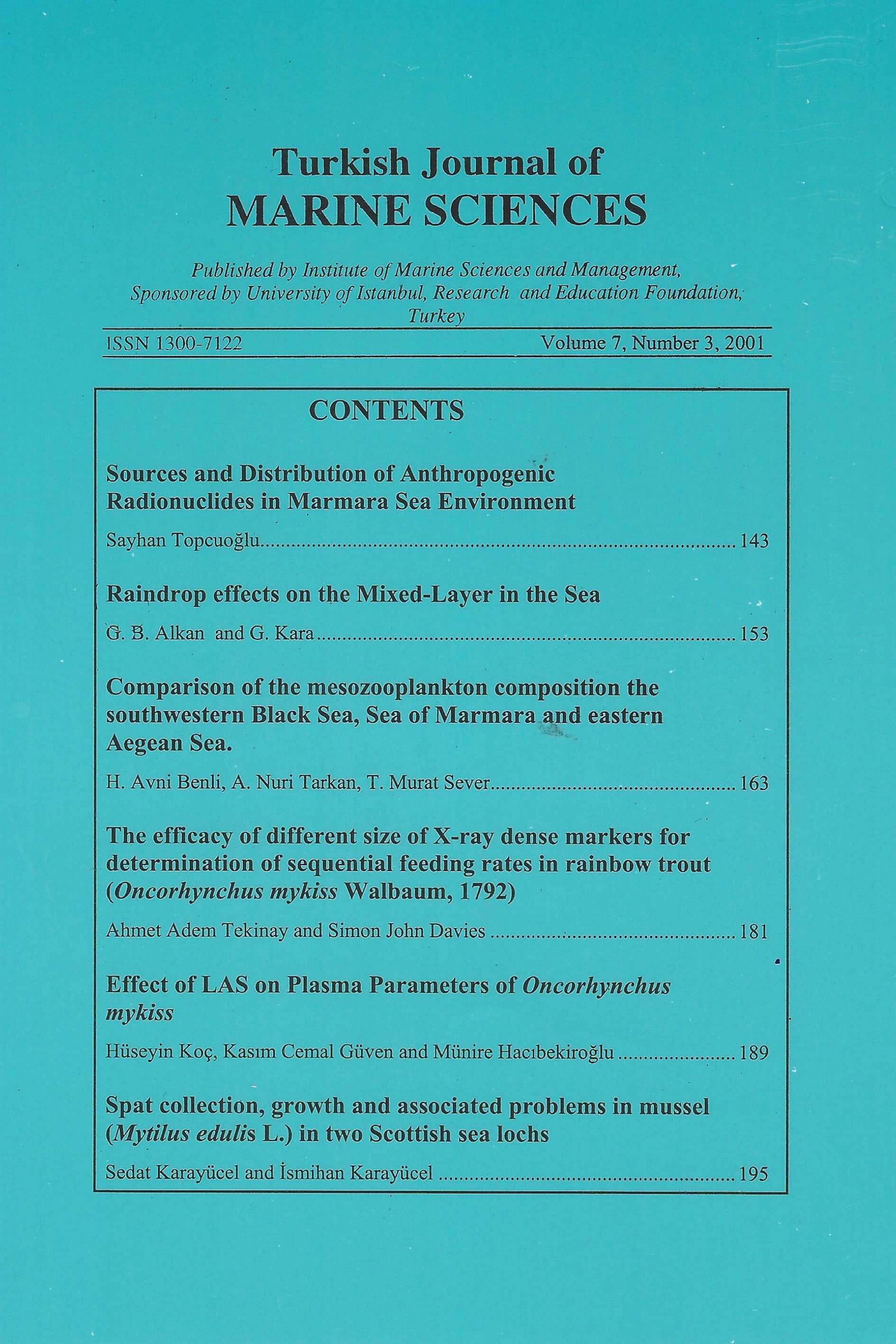 Raindrop effects on the Mixed-Layer in the Sea
G. B. Alkan, G. Kara